TCP/IP stack has two options to implement the backlog queue for a socket in the LISTEN state.

A single queue can contain connections in two different states:

And only connections in ESTABLISHED state can be returned to the application by calling the accept() syscall.

Therefore, the length of this queue is determined by the backlog argument of the listen() syscall.

In this case, connections in state SYN RECEIVED are added to the SYN queue, and later moved to the accept queue when their state changes to ESTABLISHED.

So, the accept queue stores only connections ready for the accept() syscall.

Unlike the previous case, the backlog argument of the listen() syscall determines the size of the accept queue.

BSD chooses the option 1 as its behavior implementation (though it internally indeed uses two queues).

When the queue is full, instead of sending back a SYN/ACK packet in response to received SYN packet, it simply drops the SYN packet, and let the client to retry.

Since Linux 2.2, Linux uses the 2nd option and make 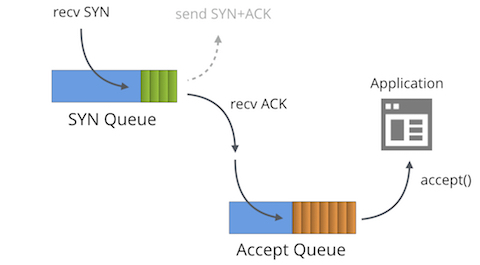 By the way, from the point of the view of the client, a connection will be in state ESTABLISHED after reception of the SYN/ACK packet.

0x01 When SYN Queue is Full

When received a SYN packet but SYN queue is full, then:

0x02 When Accept Queue is Full

When received an ACK packet, but the accept queue is full:

The maximum retry number is configured by net.ipv4.tcp_synack_retries.

However, if the accept queue is full, the kernel will also impose a limit on the rate at which SYN packets are accepted: If too many SYN packets are received, some of them will be dropped.

In this case, it is up to the client to retry sending the SYN packet.

There are two major causes of the single queue that might be full.

(1) Application calling accept() is not fast enough, making completed (ESTABLISHED) connections fill the queue
(2) RTT between the server and the client is so big, that incomplete connections (in state SYN RECEIVED) fill the queue.

By using one queue, it assumes that an application is expected to tune the backlog

If we use two dedicated queues, the SYN queue then effectively implies ACK packets in flight; and the accept queue implies how application level handles the completed connections.